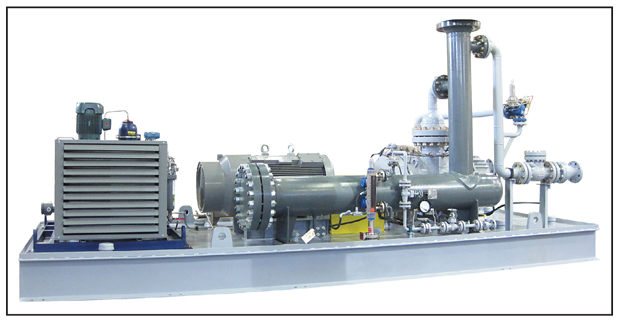 In today’s oil field economy, it makes a lot of sense for operators to be well informed about improvements and enhancements to conventional artificial lift methods to optimize and extend production from producing reservoirs.

One of the more overlooked options is adding multiphase pumping to artificial lift systems, which allows the operator to not only reduce potential downfalls from underperforming artificial lift systems but also to mitigate production issues and improve recovery in declining offshore fields as well as onshore shale and tight formations.

It is especially important in wells with low formation pressure drops at the start of initial production, and where flow assurance becomes challenging. Also, with initially free-flowing wells, the future pressure drop is very difficult to forecast and often comes faster and more sudden than expected.

Producers unintentionally underestimating pressure drop-offs has been in the news lately, with the unfortunate consequence of very negative reviews from investors and stakeholders. This makes it more difficult for operators to convince capital markets to put more money into new field developments. It is noteworthy in today’s production cycle that little is being done to “drill deeper” into the design and technologies used in process facilities.

While the industry continues to take big steps in areas such as 3-D seismic analysis, directional drilling and fracturing/refracturing, the production scenery still looks pretty much the same as ever. It seems easier for an operator to get support to spend money to drill and frac new wells instead of critically looking at and investing in improving production processes and facilities.

The conventional facility with separators, heater treaters, stock tanks and flares has changed little over the years. Although restrictions on gas flaring have led to the addition of vapor recovery units and produced water handling processes, flaring of associated gas is still the norm. An article published in the Wall Street Journal on Jan. 10 reported that 5.1 trillion cubic feet of natural gas was flared worldwide in 2018. As oil and gas is practically always combined as multiphase flow, using multiphase pumping and boosting offers an alternative to better produce liquids-rich gas and gas associated with oil production. In fact, multiphase technology can help producers eliminate well site flaring altogether.

A number of advantages can be achieved by downsizing conventional onshore production facilities or wellhead platforms to multiphase metering and boosting equipment (Figure 1). Boosting the multiphase flow in a single flowline downstream to the process or gas treatment facility can better capture valuable hydrocarbons, which makes sense even in a depressed commodity market. Additionally, eliminating stock tanks and reducing production site equipment can achieve better control of methane emissions.

In the demanding cost-driven offshore environment in particular, multiphase pumping technology provides new possibilities to maintain and enhance production. With large-scale new deepwater field developments on the back burner for the time being, more attention is focused on expanding and extending production from mature shallow-water “brownfield” assets. Many operators are looking at additional developments using subsea tiebacks and multiphase pressure boosting to move production streams to existing platforms. There is an abundance of underused process facilities in the Gulf of Mexico and elsewhere in the world. Operators can access this existing capacity at significantly lower costs than new developments.

Multiphase pumping has more than three decades of history starting with testing in flow loops in the United States and Europe, followed by the first onshore installations and subsea/platform installations off shore in the Gulf of Mexico, Brazil and Asia.

From single-pump installations with a minimum of equipment and limited capacity, the technology has quickly evolved into highly engineered installations with multiple multiphase pumps working in parallel off a common suction header and packaged as complete self-contained systems encompassing driver, auxiliary support equipment, automation and control modules.

The newest generation of multiphase pump systems has grown significantly in flow capacity, pressure boost and gas handling. This has come in response to demand for larger and more complete installations serving ever-larger producing assets and as the leading technology to bring multiphase production from the well to process facilities. The power per pump has increased substantially from a couple hundred to several thousand horsepower today. The technology’s development continues with large subsea pumps with newly developed high-voltage power distribution systems for deepwater installations. The extreme pressure and temperature conditions require special design and material considerations, and these pump systems must be qualified and thoroughly tested.

With operators demanding higher flowing capacity, especially in mature fields and wells with high gas-to-oil ratios, it has become necessary to operate several multiphase pumps in parallel mode. In a twin-screw pump, varying the speed of an individual pump controls flow and inlet pressures. But as more wells are put on stream, additional pumps must be added and operated in parallel. The challenge is to design suction headers to equally distribute gas and liquid flow to each pump as needed so that none of the pumps are starved of the liquid required for gas compression (Figure 2). In addition to the design of the headers themselves, controls and automation must be incorporated to cope with varying flow demands so pumps keep the flowing wellhead pressure at a preset constant level.

At the same time, significant improvements in the operation and maintenance of multiphase pumps have greatly improved pump reliability and uptimes, which in turn, have increased operator confidence in the technology. One area of critical importance is shaft sealing systems. Continuous improvements to the sealing systems have eliminated leaks and spills and dramatically reduced methane vapor emissions from the pumps.

When the first twin-screw multiphase pumps were introduced to high-GOR wells some 25 years ago, they demonstrated from the start how good they were at handling large amounts of associated gas regardless of whether the flow regime included annular flow, mist flow, stratified and slug flow, or anything in between. In the twin-screw pump, which is a non-contacting pump design, the rotors do not come in contact with one another or the surrounding liner. This leads to excellent gas handling capabilities with up to 97% gas void fractions (percentage of the total inlet flow) at pump inlet temperature and pressure conditions.

To handle varying amounts of gas, the pump is supported by a liquid management system that traps some of the process liquids and returns them to the pump suction (Figure 4). With help from the pump’s differential pressure, the liquids are circulated back into the pump suction. This unique feature helps twin-screw pumps retain the liquid necessary to seal the screws and remove the compression heat. Recirculation can be improved by cooling the returning liquid stream and by adding a pumping device to force recirculation at low differential pressure. This allows operation during long gas slugs and during startup as the pump draws down the gas cap of a well or a riser. The pressure boost remains the same and the pump power demand is not influenced whether compressing gas or pumping liquids.

Gas handling is a critical element with all electric submersible pumps since ESP hydraulics are dependent on gravity to produce the desired pressure boost. Entrained gas or free gas from the formation will lower the flowing gravity and the pump will move off the liquid curve and lose prime, ultimately stalling and stopping pressure boosting. The ESP will move to work at or very close to the bubble point, which can occur right after the start of initial production. To mitigate this situation, recent field installations have deployed surface-mounted multiphase pumps in series with a downhole ESP or a sucker rod pump. By reducing backpressure in the gathering system, flowing wellhead pressure is reduced and bottom-hole pressure subsequently drops. In most cases, that leads to better well inflow and a higher liquid level in the well.

In one producing field, adding a surface multiphase pump dropped the flowing wellhead pressure by 155 psi and the liquid level increased by 300 feet. The additional 300 feet of liquid submergence dramatically improved the ESP’s performance and allowed it to safely operate above the bubble point. In addition, it lowered the power consumption by 10% and is expected to result in added field life and less frequent workovers.

Liquid handling is a frequent problem in the production of wet gas reservoirs and liquids-rich unconventional formations. With liquid-logged wells, removing liquids from the production tubing string can be a major task. Additionally, flowback water streams after hydraulic fracturing need to be addressed to stabilize production. To free the tubing of liquids, the most frequent solutions are initially plunger lift, followed later in well life by an ESP or gas lift. These methods often require venting or flaring the gas in order to lower backpressure, but that can be problematic from both a regulatory and economic perspective.

A portable multiphase blowdown pump unit, based on a multiphase pump, can be connected to the wellhead to reduce the flowing wellhead pressure, thereby increasing tubing velocity, which becomes critical in lifting the liquids to the surface (Figure 5). With the help of recirculation, the pump operates initially handling gas, later liquids, and then back to gas as the well starts to free flow.

All of these developments are making multiphase pumping an attractive solution to economically produce oil and gas in today’s economic climate. With wells often abandoned too early with substantial hydrocarbon resources left behind, multiphase pumping can open new avenues for better capital expenditure utilization while at the same time address the growing environmental pressures facing the industry.

The benefits of multiphase pumping are numerous, but the bottom line is that the technology can improve total recovery and help operators make better and more economic use of their existing assets and facilities. Multiphase pumping can be a key contributor to better production economics while reducing or eliminating emissions.

The advantages enabled by multiphase pumping include:

SVEN OLSON SR. is a senior consultant for Leistritz Advanced Technologies Corp. in Allendale, N.J. His 35-year career at Leistritz includes serving as chief executive officer and president. Olson was involved in testing and introducing multiphase pumping technology to North America, and he actively participates in applying and promoting the technology in both the onshore and offshore sectors of the oil and gas industry. He holds a degree in process engineering and an M.B.A. from the University of Lund in Sweden.

This story came from the print edition of The American Oil & Gas Reporter. For other great articles about exploration, drilling, completions and production, subscribe.